The organizer, publisher and inspirationVis meny

October 25th 1975 WCIP - the World Council of Indigenous Peoples - was established in Port Alberni, Vancouver Island in Canada. First Nation people from Canada, Native Americans, Indians from South-America, Inuits and Sámi people and several others were gathered there to establish a common international indigenous organisation. Aslak Nils Sara, Ole Henrik Magga and Alf Isak Keskitalo came from the Norwegian side of Sápmi, from the Swedish Ingwar Åhren and Nils Mikal Utsi and from the Finside Pekka Lukkari, Esko Palonoja and Nils-Aslak Valkeapää; the last mentioned was to play an important part as artist and yoiker.

The South-American Indians would not recognize "those rich white Europeans" (the Sámi) as indigenous people and protested at them being present. Anthropologist Helge Kleivan had to do an 'acute lecture' on Sámi history in Spanish , but that which finely convinced them was when Áillohaš (Nils-Aslak Valkeapää)  entered the stage yoiking - scepticism and doubt were yoiked away and the conference could start. (Harald Gaski)

"...There was a rich pride in culture which showed most clearly in the evening gatherings in the auditorium - with singing dancing and ceremonies. The richness and the diversity of the gathering was hard to absorb..." (Doc.29-77 & Sanders 1999:6-7)

At the Nordic Sámi Conference in Inari (Finland) in 1976 the principles from WCIP were implemented and Nils-Aslak Valkeapää was chosen as cultural coordinator for WCIP. Later that year, and the following years, he started extensive travelling with other yoikers and duojarat - Sámi handicraft artists - to present Sámi culture to indigenous peoples in Canada, Alaska and Greenland.

Nils-Aslak was the one behind the idea to the Davvi Šuvva festival, but without numbers of helpers and volonteers there would not have been any festival;  in particular Kalle Mannela, Kjersti Simma, Jouni Labba and Svea Päiviö from Karesuando Sámi  Society as well as members from Soppero Sámi Society. Members from  Hätta/Enontekiö Reindeerherders Union also joined together with Nils Heaikka Valkeapää from Nordic Sámi Council. "... the one who worked hardest on preparing the festival was Áillohaš, - he was really enthusiastic and has the capacity to inspire people. ( Pål Doj, Samefolket )

The Davvi Šuvva festival lasted for 5 whole days and took mostly place at Kaarevaara, a hill just east of Gáresavvon/Karesuando at the Swedish side, there were also events at the Finnish side, in Karesuvanto, at the other side of the river. The bridge over the border river Könkämä was not yet build that summer; a little ferry brought people and cars across the river and the Sámi journalists had cars parked on each side.

At the Norwegian side the struggle against the damming of the Alta- Kautokeino River had been initiated; things started to happen that summer.

Áillohaš himself was 'conferancier' during these 5 days at Kaarevaara and the various groups of people had one day each to present themselves . Friday June 22nd was midsummer and the sun was shining. The festival started with presentation of Sámi musicians, yoikers and other artists. There were theater for adults and puppet theater for the children,  Dálvadis theater group did "The Fifteenth Chief" and yoikers from Kautokeino, Nesseby, Porsanger, Sevettijärvi /Enare and Lujávri at Kola peninsula performed. There was a great diversity in expression and very popular among the audience.  In the evening Ivvnit ( now Ivnniguin) played, a rock group from Kautokeino .

Saturday the Inuit people presented themselves with a choir,a  hard-rock band and not the least drum-singing and -dancing by Egon Sikivat from East-Greenland.

Native Americans and South American Indians presented themselves Sunday;  Cree people from Saskatchewan made great success with their powwow-group  and Bill Britton in particular made impact with his Hoop dance. Blackfeet and Ojibwe were also represented, as exile Indians from Peru and Bolivia with their songs, flutes and horn.

"We are all brothers and sisters" said Dave Montana from National Indian Brotherhood, " they all came... All represented Indigenous peoples from the Northern hemisphere of the world, all with one common cause: To meet, sing, yoik and dance and discuss common issues and problems"

From the Komi republic in Russia came a huge group of dancers. but they were not considered as indigenous people and communication was complicated, this was the time of the Soviet Union. Curd people and Palestinians were invited in particular.

The Sámi discovered that they had brothers and sisters from hither and yon. Many experienced that they were part of each other and that they had much in common, also the same problems.  The Davvi Šuvva festival did not only contribute to confirm and strengthen Sámi identity and the value of one's own cultural expression; Davvi Šuvva also contributed to an expanded experience of identity and community with indigenous peoples from the other side of the globe. It was a manifestation of culural and vocal expression that should become a significant medium in the struggle to come. 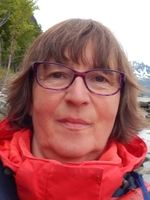 Synnøve Angell (b.1955.) Born in Narvik, from 1963 Vågsbygd/Kristiansand. Parental roots in Kvænangen. Moved to Kautokeino in 1997 after 35 years in southern Norway, now living in Tromsø. Educated Reg. Nurse with special education in Psychiatry, History of Religion from University of Oslo and Multicultural Understanding I from Sami University College in Kautokeino. Master Thesis in Indigenous Studies, University in Tromsø 2009.