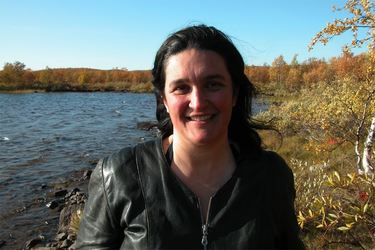 Rossella Ragazzi (PhD), born in Roma, 1965. She is currently associate professor at the department of cultural sciences (University Museum, UMAK, Arctic University of Norway). She is a visual and museum anthropologist and an independent filmmaker. She worked at university of Tromsø, Norway, Freie Universität in Berlin, Dublin Institute of Technology and collaborates regularly with ISRE, Istituto Superiore Etnografico della Sardegna and the National Museum of Ethnology Minpaku in Japan. She has specialized on mobility, childhood, memorialisation and museums, transcultural cinema, Saami and Indigenous Critical Heritage. She did fieldwork in Sápmi, Bolivia, Italy, Cameroon, France and Ireland.

She has supervised many Master and PhD students in Visual and Museum Anthropology over the years.

She is the author of several prize-winners documentaries; among others: La Mémoire Dure (2000), At Home in the World (2003), Firekeepers (2007) as well as a number of academic publications, among others the monographic book: “The Transcultural Experience of Migrant Children entering Europe in the years 2000”, Peter Lang, 2009.

In 2016 she co-edited a special issue of Nordisk Museologi on “Representation of Saami Culture in Museums” and she is co-editing a new special issue for the same journal titled “Museums as arenas for the production and dissemination of Knowledge on Sámi cultures, societies and identities”, forthcoming 2020.

Aim of my stay:

I came to Northern Norway-Sápmi at the end of the last millennium, and my cultural references at that time were mainly the multimedia and poetic work of Aslak N.Valkeapää and the book “La Mia Vita” translated into Italian, by E.Demant and Johan Turi.

The work of Valkeapää has infused me with a strong bound to Sápmi, and I have directed slowly my scholarship towards the study of Sámi activism and art. As visual anthropologist, I have made films about Sami society, among them “At Home in World” and “Firekeepers” (the latter dedicated to Aillohas memory).

During more than ten years, I have taught visual ethnography and filmmaking to Sami students that are now productive.

I have in the last two years done research about Sami collections in Japan, on the traces of Valkeapää frequentation of the country of the Rising Sun, where he is remembered. I have held a series of screenings and lectures about Sami culture and society, art and activism in several universities in Japan. The interest for Sami culture has risen. I have witnessed it during my tours.

Recently, having found a conspicuous collection of duodji that was never shown in Asia in one museum storage in Osaka, I have managed to create a collaboration in order to have a space in a major exhibition about Ainu People (recently recognized officially as Indigenous People of Japan)  where Sami People, for the first time in a national Japanese Museum, will be profiled among seven other indigenous peoples. I am in charge of studying some of the objects of that collection and to conceive a way to exhibit them together with intangible Sami heritage, in form of music, joik, art, videos and political pamphlets like the famous “Greetings from Lapland (1984)” and other texts by N.A. Valkeapää. My stay at Lásságámmi is therefore the best place to work on this task and I am grateful for the trust endowed to me, hoping to honor his memory in the best possible way.